The hat you are looking at is called a shtreimel.  It is worn by married Haredim (ultra orthodox Jews).  Adorning oneself in luxurious fur might not feel like an act of Halacha (religious laws). It

isn’t exactly ‘modest.’ However, when the Jews of very cold climes in Eastern Europe saw the aristocracy in these hats, they considered, especially on Sabbath, how lovely it would be to both honor the lord and keep themselves warm by wearing such a thing.  In order to make it ‘kosher’ though it must have Halachic meaning, and so they constructed them from multiple pieces of fur, each being made from a number of pieces having a special meaning. Common numbers are 13, 18, and 26, corresponding respectively to the Thirteen Attributes of Mercy, the numerical value (gematria) of the word for life (Hebrew: חי), and the numerical value of the Tetragrammaton.  Thus, these deeply observant men can wear this hat of fur remaining true to the law and staying warm in style!

Below, you can see the street dogs of Istanbul. They are running, like old friends going out for tea, throughout the city. You see them waiting outside ‘their’ restaurant or 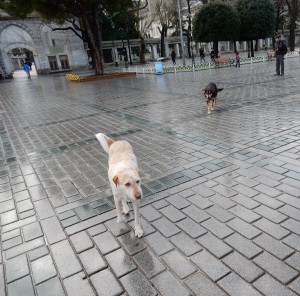 attending careful watch at a back door with empty bowls beside it.  Sure enough, patrons will emerge and offer their leftovers, and home owners will fill the little bowls much to the joy of the pooches. The dogs have little tags on their ears to connote that they have been given all shots necessary to insure health. They are friendly, clean, abundant, and often come nuzzling up under your hand for a friendly scratch.

“Where do they live?”  I asked a Turkish guide.  “Oh they live on the streets, but everyone feeds and cares for them.”  ‘OK,’ I thought, ‘that’s different.’  My brother in law who must walk their dog in Houston three times a day was passionately interested in spreading this pet care innovation.  It wasn’t until later that week

while reading more about Islam (Turkey is 98% Muslim) I ran across a law that prohibits Muslims from keeping dogs as pets. A law is a law, but there is no law that condemns caring for them communally, outside the home, and that is exactly what the people of Istanbul do.

OK, so what do these two religious traditions have in common?  When they have secular desires, whether it is to wear a warm stylish fur hat, or have the companionship of a canine, they do not violate the law, but cleverly circumvent it.  The Haredim turn the desired object into a sacred one.  The Muslims of Istanbul maintain what is required within their homes, but expand their community to create a welcoming one for man’s best friend.

Do you know other examples of this wonderfully real ability to accommodate new needs within ancient belief systems?

← Welcome to ISTANBUL, NOT CONSTANTINOPLE
An Integrated Life: Storytelling and Climate Disruption Part 1 →

6 Responses to Stray Dogs and Shtreimels: Want Does Istanbul and Mea Shearim Have in Common?