I went to a hearing at the Massachusetts DEP (Dept. of Environmental Protection) to give testimony about the importance of the GWSA (Global Warming Solutions Act) passed in 2008 and then not acted on efficiently by the state.  Various people stood and offered the panel clear evidence of the need for action, suggested priorities and offered ways to enforce the act.  A smiling young woman, with a warm engaging air, wearing jeans, her hair in an easy pony tail, stood and introduced herself as nuclear scientist.  I kept looking for unseemly mutations, like horns or a third leg, but none were visible.  She spoke to the necessity of using nuclear power as one of the arsenal of carbon neutral alternatives that must be employed if we are to ween ourselves off of fossil fuels.  She was sitting with three other young  (Under 35) scientists, all hailing from MIT who spoke to the safety and necessity of nuclear 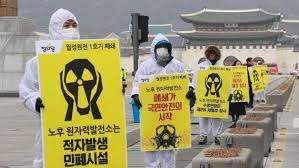 power.  They were all engaging, enthusiastic, and charming.

As a die hard member of the Clamshell Alliance, a civil disobedience based organization that tried, with all its might, to stop the building of the Seabrook Nuclear Power Plant, I was leery.

When the hearing concluded, went over to chat with the scientist, and asked if I had been sleeping while they’d discovered a safe way to dispose of the plutonium.* With great excitement a cell phone emerged and almost in unison they told me that I had to watch ‘this.’

It was a video of a jet plane ramming what they identified as a containment vessel. “See, it’s still completely in tack.  You can’t destroy it.”  Kept at the nuclear power plant sites, they are eventually ‘geologically disposed.’  That means they are buried in rocks. Problem solved!

Their authentic excitement and passion for the technology was endearing, and from the vantage point of MIT research labs, logical.  Then I flashed on Homer Simpson in the control room.

What they can’t promise is that the owners and staff of these plants will all do their jobs with complete integrity.

What they cannot promise is that radiation will not leak from the power plants.

What they can’t promise is that uranium tailings will be safely disposed of.

What they can’t promise is that these highly expensive facilities are economically more logical than growing solar and wind power capabilities.

What they can’t promise is the safe decommissioning of these highly dangerous facilities.

What they can’t promise is that in our increasingly unstable environment, featuring extreme weather events won’t create another Fukushima.

I admired the passion and ambition of these nuclear scientists, but would like them to keep this technology in the laboratory.  What do you think?

*Plutonium emits alpha radiation. It enters the bloodstream via the lungs, then moves throughout the body and into the bones, liver, and other organs. It generally stays in those places for decades, subjecting surrounding organs and tissues to a continual bombardment of alpha radiation and greatly increasing the risk of cancer, especially lung cancer, liver cancer and bone sarcoma. One isotope of plutonium, Pu-239, has a half-life of 24,100 years.  Can you understand my concern?

← All Too Familiar: Weimar Germany and 2016 USA
SAFE HARBOR? No, But There’s No Place Like Home →

One Response to Warm and Fuzzy Nuclear Power